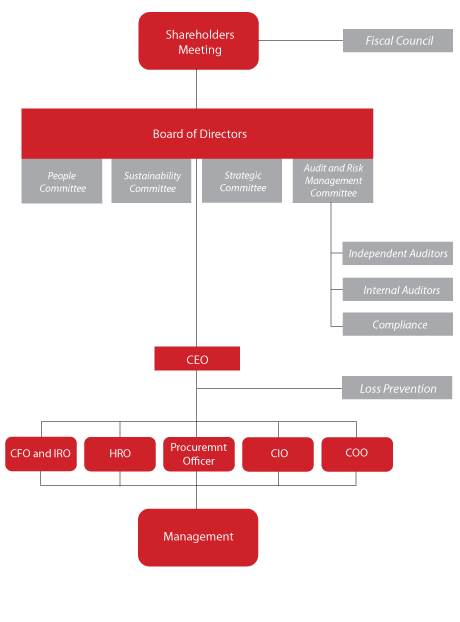 Inside Corporate Governance there are specific departments such as: Compliance – created in 2010 to ensure alignment with the guidelines of regulatory bodies for financial products and its scope was expanded in 2016 for Corporate action, with a more strategic coverage and serving all the subsidiaries of Lojas Renner; Legal – this department coordinates and monitors topics related to regulations and laws in force; Loss Prevention – this department has the purpose of ensuring full operation of the Loss Prevention Program, assisting in management and acting in the prevention and reduction of losses caused by unlawful acts and administrative and operating mistakes. These departments jointly oversee the decision making process through the integrated assessment of risks and their respective impacts.

Furthermore, it is also important to mention the Investor Relations department – which establishes the relationship with the stock market and interacts on a daily basis with every company investor and shareholder. The company periodically monitors the performance of businesses and transactions in order to prevent threats that may compromise the good results of business. Risk management processes are integrated into the Corporate Governance system (see chart) and include internal audits and external audits.

In 2015, we celebrated ten years as the first corporation in Brazil, with 100% of its shares traded on the stock exchange, in accordance with the best international practices of corporate governance. Still in 2015, the Company’s Board of Directors approved two important policies: firstly, Related Parties, establishing rules for ensuring that decisions involving related parties and situations with a potential conflict of interests, be adopted in view of the interests of Lojas Renner and its shareholders. Secondly, in relation to Governance, Risks and Conformity in order to improve the organization’s performance through the identification of opportunities for gains and a reduction in the probability and/or impact of losses, establishing greater rigor than compliance with the standard regulatory requirements alone.

As is common knowledge, in 2005, the Company became the first listed joint stock company to have all its shares traded on the stock exchange. Consequently, from then on, it ceased to be a company with controlling shareholders, adopting the model which is characteristic of major North American corporations in this respect.

In 2005, there were no Brazilian benchmarks to give comfort to the Company and its shareholders as to this new corporate model. The inclusion of a poison pill clause in the Corporate Bylaws such that a shareholder acquiring a 20% or more stake would have to make a public offering of shares (POS), was one of the ways of guaranteeing to remaining shareholders that there would be no significant changes in the company. And in the event that such a contingency occurred, the shareholder would not be harmed since the offer would have to be extended indistinctly to all holders of Renner’s equities at already predetermined terms and prices. In this context, the provisions to articles 39 and 40 of our Corporate Bylaws favor the maintenance this structure.

It is the view of this Body, that the totally dispersed capital stock model contributes greatly to ensuring that the Company continues its constant search to be a benchmark for best corporate governance practice. There are several examples of Renner’s pioneering initiatives in this respect: we were the first Company in Brazil to put out a Manual for Participation in Shareholders’ Meetings, the first to issue a Public Request for a Power of Attorney pursuant to the rules of ICVM 481/09 and, for some years now, no longer requiring signatures on powers of attorney to be notarized/consularized. We also have a large number of independent directors with seats on the Board, a percentage much higher than is mandatory under Novo Mercado Listing Regulations.

Furthermore, it is worth pointing out that the Company is not insensitive to eventual criticisms of this poison pill mechanism and more especially, its trigger of 20% or more of the capital stock, such criticisms being made to the effect that this percentage could be increased as an incentive for those institutional shareholders believing in the Company to increase their stake. However, while this issue, not uncommonly, is the subject of discussions at Board level where due consideration is given to eventual shareholder wishes, the overriding opinion is that it is healthy to maintain a high degree of liquidity through the existing widely held corporate model.

To the present time, the sentiment of this Board is to endeavor to maintain the status quo for reasons already mentioned, protecting minority shareholders and guaranteeing a high degree of share liquidity.

In 2000, B3 – Brasil, Bolsa, Balcão implemented three special listing segments known as Levels 1 and 2 of Differentiated Practices of Corporate Governance, and the Novo Mercado (New Market). The purpose was to create a secondary market in securities issued by open capital Brazilian companies that adhere to the best practices of corporate governance. The listing segments are designed for the trading of equities issued by companies that voluntarily undertake to comply with good corporate governance practice and stricter requirements for disclosing information in relation to those already required by Brazilian corporate law. In general, these rules enhance shareholder rights and improve the quality of the information supplied to the shareholders.

Renner’s shares are traded on the Novo Mercado. The Novo Mercado is a special segment of B3 – Brasil, Bolsa, Balcão´s equity market destined exclusively for companies that meet the minimum requirements and agree to adhere to the differentiated corporate governance rules. The following items summarize the principal points characterizing the Novo Mercado and are applicable to the Company:

The Brazilian capital markets are regulated by the CVM (Brazilian Securities and Exchange Commission), which has general authority over the stock exchanges and the capital markets, as well as by the CMN (National Monetary Council) and by Bacen (Central Bank of Brazil), which have, among other powers, the authority to license brokers, at the same time, regulating foreign investment and foreign exchange transactions. The Brazilian capital markets are governed by Law 6385/76, Law 6404/76 and instructions, resolutions and other normative acts published by the CVM.

B3 – Brasil, Bolsa, Balcão may suspend trading in a particular security in anticipation of the announcement of a material fact. Trading may also be suspended on the initiative of B3 – Brasil, Bolsa, Balcão or the CVM for, among other reasons, if there is suspicion that a company has provided inappropriate information with respect to the material fact. Suspension may also be declared where inappropriate replies have been given to any eventual investigation by the CVM or the stock exchange.

Law 6385/76, Law 6404/76 and the regulations issued by the CVM provide for undertakings among others, in respect to the disclosure of information, restrictions on trading based on insider information and price manipulation, as well as protection for minority shareholders.

Trading on the Brazilian stock exchanges by non-residents is subject to certain restrictions according to the Brazilian legislation on foreign investments.

DISCLOSURE OF EVENTUAL AND PERIODIC INFORMATION

The Joint Stock Companies Law, the regulations published by the CVM and the Novo Mercado Listing Regulations require that a listed company shall supply the CVM and B3 – Brasil, Bolsa, Balcão with certain information on a periodical basis. This information will include annual and quarterly information and quarterly management discussion and analysis reports as well as the report of the independent auditors. These rules also make it mandatory for Renner to file shareholders agreements and convening notices for general meetings together with the minutes of these meetings with the CVM.

A BENCHMARK IN CORPORATE GOVERNANCE

In 1967, Renner opened its capital. The B3 – Brasil, Bolsa, Balcão is the principal market for trading the Company’s shares, negotiation of which began in 1972. At an Extraordinary General Meeting held on May 25 2005, the following resolutions were approved, among others: (i) conversion of all company preferred shares to common shares, (ii) the reverse stock split of our shares in the proportion of 253 old shares to 1 new unit of capital; and (iii) the amendment to the Company’s Bylaws to adjust them to B3 – Brasil, Bolsa, Balcão’s requirements for a Novo Mercado listing.

Renner is a benchmark in corporate governance:

Data security is one of the pillars of Lojas Renner S.A. and part of the fundamental commitments in the Code of Conduct. The Company has a strong focus on mitigating cyber risks and protecting sensitive information. In this context, Renner has a formal Data Security Policy, a structured Data Security department, and a multidisciplinary Data Security Committee.

How does Lojas Renner S.A. protect itself from cyber attacks?

One of the risks that has challenged companies most is that of attacks and intrusion by hackers (or crackers).

The risk of data leakage is undoubtedly a relevant challenge faced by companies, especially large retailers.

Lojas Renner S.A. places a strong focus on protecting customer data. Since 2012, the Company has , recertified annually with the PCI DSS (Payment Card Industry Data Security Standard), a data security standard for organizations that handle branded credit and debit cards (Visa, Master and others) . Renner has also been using data protection techniques for databases and active DLP (Data Loss Prevention) tools to monitor and prevent the leakage of sensitive data.

The Company is currently focused comply with “LGPD” (the Brazilian General Law for Data Protection), which will come into force in Brazil in February 2020.

How does Lojas Renner S.A. manage identities and accesses?

Another challenge is Identity and Access Management (IAM), also known as the “Triple A” of data security: authentication, authorization, and accounting. Risks related to weaknesses in internal controls in this respect are commonly detected by internal and external audits in organizations of all sizes.

Lojas Renner S.A. and partner companies have an employee identity and access management platform covering the most relevant systems and the access accounts. The platform is based on RBAC (Role-Based Access Control) concepts, Single Sign-On, and complementary processes.

How does Lojas Renner S.A. address the “security awareness” of people?

Market research indicates that most security incidents are caused by internal staff or third parties who have authorized access to sensitive information.

Lojas Renner S.A. believes that its employees and staff from partner companies form the most important link in our ecosystem’s information protection network. Our People corporate value (“hiring, developing and retaining the best people”) underscores this point. In this context, we have a corporate program run jointly with the Human Resources department and focused on education and security awareness.

The program includes induction lectures on data security for new employees, an online data security course, educational campaigns on topics such as precautions with passwords, phishing, information classification, among other initiatives.